We are a ATV, UTV and lawn and garden machinery specialist with a headquarters on the Deacon family farm in Marston Moreteyne, Bedfordshire and a second branch in Ixworth Thorpe, Bury St Edmunds, Suffolk. We are the only company in the UK that can offer all 4 of the leading ATV brands (Suzuki, Yamaha, Kawasaki and Honda) from one showroom.

Originally formed in 1987, MKM Agriculture has evolved from three friends working from a converted pig shed, repairing and servicing the local farm machinery, to a multi-franchise business, including Suzuki, Yamaha, Kawasaki and Logic to name just a few. Working from a purpose built workshop, store and showroom we are dedicated to providing a second to none service to the local community and surrounding areas. Our fantastic parts service has grown massively and our customers call us from far and wide across the UK and Ireland for a service then can rely on.

1991 - 1998 Valmet Tractor Dealership
Business was going very well dealing with the repair of local tractors and the supply of second hand tractors. In 1991 we were appointed Valmet tractor dealers, we sold many Valmet tractors through until 1998 when changes within Valmet, then becoming Valtra, forced us to terminate the franchise. To this day we continue to service the Valmet tractors we sold in this period.

2000 New Build
The major transformation started in the year 2000 when, as a result of expansion, owner Mark Deacon decided it was time to move out of the original workshop, into a new purpose built much bigger building, with enough workshop space to cope with the increasing size of tractors and implements we found ourselves working on. Also, with plenty of storage for spares as well as new offices and a showroom.

2004 The start of the Suzuki partnership
The next major step was three years later, when we were approached by Suzuki to sell their range of Utility ATV's, after careful consideration, we decided it was the right time and product for us to promote, and in April 2004, we took delivery of our first Suzuki ATV's, hitting the ground running, we were well into double figure sales in the first 12 months.

2006 Sport and Leisure ATV's
Following steady progress, we took on the Suzuki Kids and Leisure ATV's, to meet the growing demand. The Suzuki LT50 and LT80 kids quad is renowned for its quality and reliability, so sales of these models were plentyful. We also began selling the LT-Z400 and LT-R450 race models and took charge of the Suzuki GB ATV racing team where we competed across the UK and Europe, winning many titles.

Also during this same period, we found ourselves having diversified, unintentionally into the repair and service of drilling rigs, originally just on landfill sites locally, but once word was spread about the range of services we offer, we soon began to travel as far North as Sheffield, Bristol to the West, Norwich to the East, and South London, carrying out specialist hydraulic Repairs, Welding, Fabrication and Service work, on and off shore.

Due to increase in demand for the ATV's and associated equipment, we concentrated heavily on providing a top class service to many industries requiring the uses of All Terrain Vehicles.

2010 JCB Workmax utility vehicles
We were appointed JCB Workmax dealers, to supply Utility Vehicles to similar industries and beyond. At this time the UTV market was growing fast, against strong competition we sold the JCB Workmax products very well, so well that sales man Anthony Deacon was awarded with a trip to the JCB factory in Savanah USA in 2014 as a reward for the most JCB Workmax sales in this period.

2013 Introduction of Yamaha
We were approached by Yamaha Motor Europe to take on the Yamaha ATV franchise. Our local competitor Frank Cook was retiring from the sales of Yamaha ATV's after many years of service and success. Both Frank and Yamaha knew we were the right people to continue with the success and reputation that Frank had built in the area and we were more than happy to for fill this request.

2015 Welcome Kawasaki!
We were appointed Kawasaki Mule dealers for the area. The UTV market was a huge part of our business and with the end of JCB we were approached by a range of UTV manufactures to sell their products. We chose Kawasaki very wisely over the other offers. We were very familiar with dealing with Japanese based companies and have always been very pleased with the back-up and support they provide. Kawasaki have a very good range of Mules which have been around for a very long time, well built and well proven we knew this was the right machine for our customers.

We were approached by Honda in 2016 and asked if we would be interested in representing them in the area. Honda understood the importance of ATV's being sold through specialist ATV's dealers, dealers selling ATV's as a side line to other products can not always offer the best customer service which we believe is duly deserved by the end user. After serious consultations with Suzuki, Yamaha and Kawasaki we decided it was the correct business decision for MKM and our customers to take on the Honda franchise, Honda are market leaders in ATV sales in the UK and have been producing quality reliable machines for many years. We are now the only company in the UK to be able to offer all 4 of the leading Japanese brands from under one roof.

The time had come to further expand our premises as just like back in 1999 we were out growing our existing working space. We made the decision to move the workshop out of our purpose built building and move it 30 feet across the yard into the old cow shed. The new workshop was designed with a layout to cater for ATV's and UTV's and also expect a bigger machine from time to time. Due to the introduction of Honda we had a larger range of machines in our product line up and our sales team feel its important to be able to display a wide range of machines to ensure our customers make the correct choice when choosing an ATV. This meant we needed a larger showroom so with the workshop moving out we removed the dividing wall in our main building and created what is possibly the largest specialist ATV showroom in the UK with more choice than anywhere. A proper 'one stop shop'.

The opportunity was made available to us to open a specialist Honda branch in the Suffolk area and we decided this was an opportunity that we could not miss. The area was previously managed by Fieldens and we were fortunate enough to be awarded the dealership by Honda in recognision of the sucsess of what we have done with Honda from our Bedfordshire headquarters. Keith Collins (ex Fieldens) is branch manager and brings a wealth of experience and product knowledge. We also offer the full range of Honda lawn and garden machines from this branch 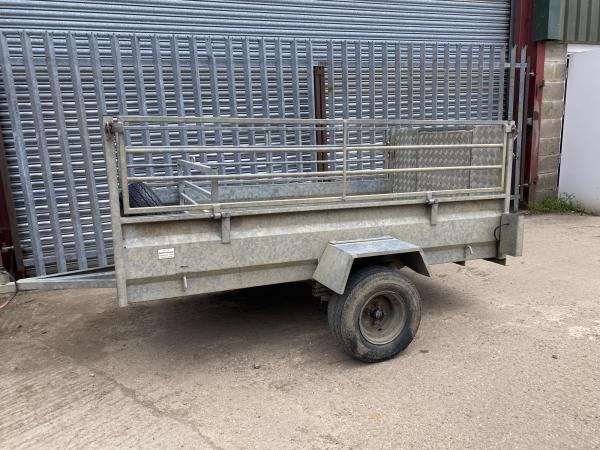